You are at:Home»Older posts»Short and Sweet at Day Four of the WPT National Series at Paris 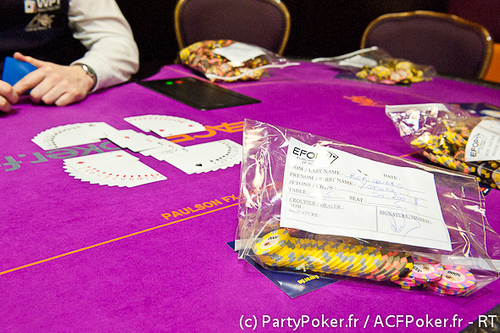 It was likely that today would be a short day. The tournament director had planned to play down from ten players to a final table of eight and it took 90-minutes to achieve his goal.

One person who must be wishing he had spent 90-minutes somewhere else was Sam Trickett. The Londoner started the day with 849,000 chips and 2nd place on the leader board but he finished with 191,000 and currently resides in 7th place.

Trickett doubled up three of his opponents in that 90-minutes. The first beneficiary was the Italian Nicolo Calia. Calia moved all-in for 121,000 with

and Trickett called with

. The flop contained a queen for Calia and he doubled up. The second player to benefit from the Trickett stack was Jean-Louis Tepper. Both players had just checked a flop of

when the dealer peeled off the

on the turn. Trickett checked and Tepper moved all-in for 209,000. Trickett went into the tank and Wagner called for time before Trickett made the call. Trickett showed

. The river was the

giving Tepper two pair. Next came Tobias Wagner when he raised to 26,000 on the button, Natalia Nikitina called in the small blind and Trickett moved all-in from the big blind. Wagner also moved all-in prompting the young Russian to fold and we were heads up. Trickett had

and Wagner a Dominating

. The board offered no salvation for Trickett and he will return to the final table as one of the short stacks.

Party Poker qualifier Ingo Paulus was glad that he turned up today. Paulus started the day with 392,000 but thanks to a huge double up against Jean-Francois Tyczynski Paulus returns for the final table in 2nd place with 983,000 chips. Tyczynski raised to 28,000 on the button and Paulus three-bet to 85,000 before the Frenchman moved all-in and Paulus called. Tyczynski had

. The board remained kind to Paulus and Tyczynski was our first of two players eliminated today.

The final player eliminated today was Nichlas Mattson. Mattson had spent large portions of this event as the chip leader but was short-stacked in a hand against Benjamin Pollak yesterday. Mattson, who finished 2nd to Jake Cody at last years WPT London main event, got his last 168,000 in the middle holding

holding no hope for Mattson and we had our final table.

The live updates from day four can be found here