You are at:Home»Features»Interviews»Sergey Prien: Kotelnikov Dismantling My Game Motivated Me

Russian grinder Sergey Prien has a former WPT World Online Championships champion to thank for his recent success in the Legend of the Week promotion. Prien finished fourth in Leaderboard 4 one week before finishing in first place a week later.

Prien discovered poker some time ago and began his career by playing freeroll tournaments. He took some time from grinding our Daily Legends tournaments to tell us a little more about himself.

“Hello! I am from the city of Volgograd and I started playing poker in my freshman year. To be honest, I did not understand anything, but I found the game interesting, and I played it with my heart. I liked it and began studying the game. Freerolls are where I started playing because I was scared of losing money, but as my understanding grew, I started treating poker more professionally.”

Finishing fourth in the Legend of the Week leaderboard than taking down the same leaderboard is an incredible achievement. Prien did not set out purely to win the leaderboard, it just kind of happened because of how often he enters partypoker tournaments.

“A lot of my play is at partypoker so I managed to accumulate a good number of points. I finished on top of the leaderboard thanks to winning the $22 Predator where I won $3,095. The key factor to my victory was the amazing training in the KOT team, including training headed by Andrey Kotelnikov.”

Kotelnikov, who Prien mentioned, is a superb player, one who won the WPTWOC Mix-Max Championship last year. Victory in the $3,200 buy-in tournament secured a $488,508 prize for Kotelnikov.

Under Kotelnikov’s guidance, Prien’s game has come on in leaps and bounds. It is not only the continual training that has helped, the fact Kotelnikov was damning in his evaluation of his student’s game spurred on Prien to become a better poker player.

“Before fully joining the team, Kotelnikov completed dismantled my game, which bizarrely motivated me to improve.”

Finishing first on Leaderboard 4 meant Prien’s partypoker account was now awash with more than $1,500 worth of Daily Legends tickets. This is what is great about the Legend of the Week promotion, it gives our players the opportunity to play in tournaments they would not ordinarily be able to compete in. 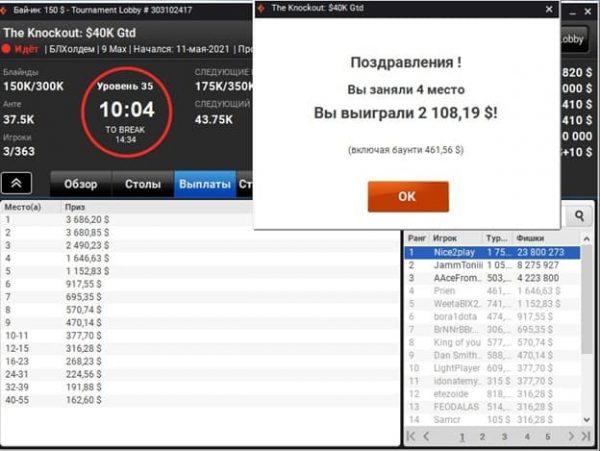 The $150 Knockout was one such tournament. Prien navigated his way to a fourth-place finish and grew his bankroll by $2,108.

“This was my first tournament at partypoker that cost more than $50. There was a key hand that happened and everything ran like clockwork after that. Basically, I bluffed my entire stack using a strange line with incomprehensible bet sizing; don’t do this, think before you bet! It worked and I managed to reach the final table where I fought hard but the showdowns did not go my way. Eventually, I finished fourth and won more than $2,100.”

Prien’s goals for the rest of the year are to continue improving as a poker player and, hopefully, win another Legend of the Week leaderboard.

“I learned about the promotion from a friend and I was pleasantly surprised! Now I almost never miss these tournaments and I hope to get into the prizes of the leaderboard again. The leaderboards are great and there are a lot of prizes, so I am sure this will happen.”

If you’re ready to jump into the action, then click here to download partypoker and get started!

If you already have an account with us, click here to open partypoker and hit the tables!