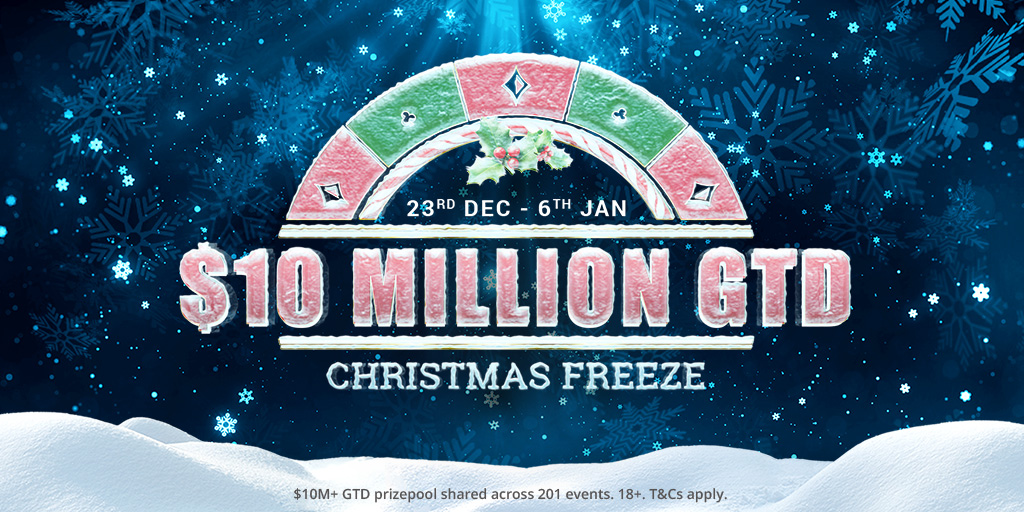 Christmas Freeze Day 7 was nothing short of huge with $1,648,597 paid out across 17 action-packed events. Canada’s “VictorVazquez” was the biggest winner, heading to bed having banked more than $50,000, let’s take a look at which event that triumphed in.

Christmas Freeze: The Story So Far

With bounties included, nobody at the eight-handed final table walked away with less than $5,000 for their $530 investment, with those finishing fourth and higher netting themselves a five-figure haul.

Ukraine’s “BaLbKuN” and “VictorVazquez” fought heads-up for the title and it was the latter who emerged victorious to boost their bankroll by a total of $50,840; the runner-up won $27,413 in total.

Another big first-place prize was awarded in the Christmas Freeze #23-HR: $200K Gtd on Christmas Freeze Day 7. Some 205 players created a $205,000 prize pool that was shared among the top 32 finishers.

$4,715 was the least any of the eight players at the final table could win and was the sum Sweden’s “petdet3ctive” netted when they fell in eighth-place. “Drulitooo” ($6,355) and “Sheparentao” ($8,610) then fell by the wayside to guarantee a five-figure score for the surviving players.

“Lucjan_cyfer” from Poland got their hands on $11,275 when the busted in fifth-place with “GettinDaize” turning their $1,050 investment into $15,990 after exiting in fourth-place. Andorra may not be a country associated with high stakes poker but try telling that to “senyorpou” who collected $21,627 for their third-place finish.

Heads-up was a battle between Netherlands and Bulgaria and it was the Dutch grinder “Iluvia71” who triumphed. First-place netted them $41,799 with “NoSixFive” securing the $0,340 runner-up prize.

Two other players, namely “XxXMLGPROXxX” and “GreenNaugahyde” scooped five-figures; third-place was worth $16,620 with fourth-place netting $11,200.

Another 15 Christmas Freeze events are planned for Day 8, which takes place on New Year’s Day, January 1st. These 15 events have combined guarantees weighing in at an $570,750, kick off 2019 in style by becoming a Christmas Freeze champion.. Good luck at the tables!

Don’t forget that all Christmas Freeze events are freezeouts so it is game over when you bust!

Ready to join the party?

If you’re ready to jump into the action, then click here to download partypoker and get started!

If you already have an account with us, click here to open partypoker and hit the tables!